The Fédération Aéronautique Internationale (FAI) was founded on 14 October 1905. In the 1960’s, the FAI established the Kármán line as the beginning of space.  The line was named after Theodore von Kármán,  an engineer and physicist with interests in aeronautics and astronautics.  While von Kármán wrote about and discussed a range of values, but himself never came out and said “100 km”, that is the value which was generally agreed upon. Note that I say “generally”… NOT universally!

The Kármán line is widely recognized as the boundary of space, but not all countries or entities agree. In the United States, the United States Air Force defined space as beginning at 50 miles altitude (approximately 80 km). The FAA, in turn, agrees. Several pilots of the X-15 were awarded astronaut wings based on this definition. (A couple of X-15 flights did meet the FAI definition.)

Now comes the day when space tourism has arrived, and a couple companies are already offering sub-orbital flights to space. Blue Origin, using its New Shepard vehicle, is reaching 100+ km in altitude. Virgin Galactic and its SpaceShipTwo are reaching above 50 miles, but falling short of 100 km (approximately 62 miles). Competition leads one to declare they are the real deal, while the other also claims legitimacy.  (No matter who is “right”, either one is, in my opinion, one hell of a ride!)

There has been discussion among many (not JUST Virgin Galactic) that the definition needs to be changed, and the most common argument is for the 50 mile definition.  One argument, and a strong one at that, is that 50 miles  is the top of the mesosphere. The Kármán line, at 100 km,  is in, but not on a boundary of, the thermosphere.

Fifty miles altitude was chosen by the USAF is because it is at that altitude that aerodynamic lift of aircraft becomes negligible.

Given that there are many ways to define the “beginning of space”, and that the mesosphere really can’t be absolutely defined, and that the Kármán line is also somewhat arbitrary, should we leave things alone (and let people argue about who is “really” an astronaut), or pick a definition and stick to it?

If we are to choose one, which one? I for one think we need a single LEGAL definition. Also, because the Kármán line is, in reality, somewhat arbitrary, it should NOT be it.  The x-15 pilots were heroes of mine, and I would hate to seem them lose their astronaut status.

But let’s be practical. The border between the mesosphere and thermosphere would be nice, but that isn’t a FIRM altitude. It COULD be as high as 120 km. The lowest possible single orbit without reentry is about 125 km.  The space shuttle began to “feel” atmospheric drag at 122 km. Ion behavior changes at 118 km.

I guess I would have to vote for 120 km (74.56 miles) to be where space should begin, at least where manned spaceflight is concerned.

If you have a website with a contact form, you probably know of the “beloved” Eric Jones. But it doesn’t have to be that way.

If your site is Word Press, get an Akismet account and API key and install the Akismet Antispam plugin. If your contact form is Contact Form 7, these lines in the form will block this prolific spammer:

I believe Akismet will also work with other contact forms, such as Gravity.

If your website is not Word Press, but can handle PHP pages, a custom contact form can easily include a filter to exclude his email id. Here is a sample snippet of code:

Boeing experienced some software issues on its unmanned test of the CST-100 Starliner. One of the flaws prevented the Starliner from docking with the International Space Station. A second identified flaw could have potentially had catastrophic effect on the return from orbit. Boeing has been criticized for taking shortcuts in its software testing.

The program manager in charge of Boeing’s Starliner crew capsule program said Friday that additional checks would have uncovered problems with the spaceship’s software that plagued the craft’s first unpiloted orbital test flight in December, but he pushed back against suggestions that Boeing engineers took shortcuts during ground testing.

Mulholland said Boeing engineers performed testing of Starliner’s software in chunks, with each test focused on a specific segment of the mission. Boeing did not perform an end-to-end test of the entire software suite, and in some cases used stand-ins, or emulators, for flight computers.

Hmmm… It would seem to me that not performing an end-to-end test and using stand-ins or emulators in place of actual flight computers ARE SHORTCUTS!

I am calling BS on this one…

Microsoft said it has not seen any evidence that hackers have used the technique.

That sure was nice of the NSA. I mean, when was the last time the NSA cared so much about individual security?  To the best of my recollection, the last time was — NEVER!

I have three questions, just for thought…
1) Do you trust the NSA?
2) Do you trust Microsoft?
3) Is it possible there was no flaw, but the NSA was having trouble clandestinely accessing certain parts of Windows 10 machines and needed a system modification from Microsoft to give them such access, thus the urgent “fix”?

I am making NO accusations here, just asking a question no one seems to be asking.

Remember the saying “Sometimes a cigar is just a cigar.” It is very possible that there really was a flaw in Windows 10 (there are, after all, LOTS of flaws in Windows 10), and the NSA was indeed being nice and Microsoft indeed fixed an unused but potentially  serious security problem.

However, considering the reputations of both the NSA and Microsoft, there needs to be room for suspicion.

Here are listed 67 TLD’s (top level domains) which have provided me pure spam.  I have never gotten a single legitimate email from any of them. This doesn’t mean there aren’t legitimate users of any of these, but it DOES indicate, to me at least, that those legitimate users are few and far between.  As a result, these are all blocked outright. This hasn’t eliminated spam, but sure as **** taken a HUGE bite out of the mess (80%+).

I was trying to install a codec for Windows Media Player. (I know what you are thinking… WINDOWS? I usually work with Ubuntu, but confess I do sometimes use Windows…). Anyway, low and behold I happen to discover something called Segurazo Antivirus running on my machine!

Supposedly, it is a good, lightweight antivirus… But I have a question…

IF Seguarazo is SO good, why do they have to do a clandestine install, without asking for permission, or ANY notification? I have to suspect, that claims to the contrary, there is nothing ANTI about this Segurazo Virus!

And it wasn’t easy to get rid of, either!

So remember SEGURAZO, a product to shun, avoid, stay away from… and uninstall if you find yourself victim. After the uninstall, there was STILL a lot of Segurazo crap in my registry.

Segurazo is NOT an antivirus, it IS a virus, an unwanted program, possibly spyware or adware.  No reputable program needs to secretly install itself.

Segurazo… you need to be ashamed of yourselves!

I get something like this in my (spam) email folder ever week or so. In fact, I’ve been getting them off and on for the last year or so… haven’t really kept track. I’ve gotten two in the last 24 hours… different bitcoin address each time.

Well, I never have paid a single cent. Really don’t have much use for bitcoin. I am STILL waiting for whoever is sending me these to just hurry up and expose me! I’m really getting bored sitting here waiting for that other shoe to drop! I REALLY want all my friends and contacts watch those same cat videos I find so funny! But videos of me…? MAN, ARE YOU GOOD! You got videos of me and my desktop doesn’t even have a camera!

Oh… all those passcodes you have… could you send them to me? Seems I’ve forgotten most of them… 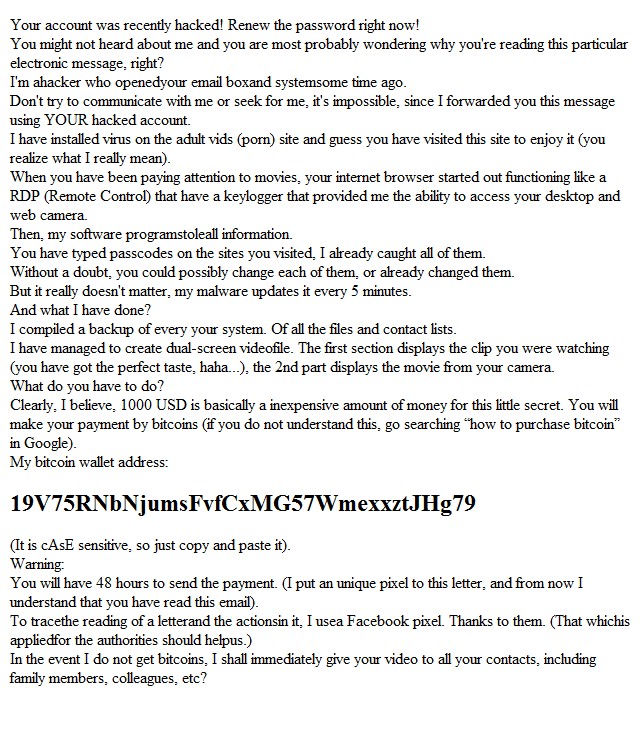 … and would you PLEASE clean up your grammar? How do you expect to be taken seriously when your sentence structure is so poor?

Well, it seems yet ANOTHER WordPress plugin “updated” itself into being useless. We found out our Contact Us page wasn’t working. The cause? An “updated” plugin. We rolled the “update” back two versions and the form is working again. Reading more about the issue, I found that the developer does just like Microsoft… instead of taking responsibility for the issue, they pass the blame, in this case, to whoever developed the theme! How many times have I heard: “There’s nothing wrong with our app. It must be your setup.”

I guess they are following the old Microsoft adage:
Update it until it breaks. We won’t be happy until you aren’t.

Amazon has pulled several anti-vaccination videos from their offerings.

Now, I’m not saying vaccines are good, nor am I saying vaccines are bad. But I WILL say that YOU have a right to get information, pro OR con, and make the decision for yourself. Amazon wants to deny you that right in the name of political correctness.

Here are other links to the three videos banned that I know of:
We Don’t Vaccinate!
Shoot ‘Em Up: The Truth About Vaccines
Vaxxed: From Cover-Up to Catastrophe

Note to Amazon: I’m not big on censorship. Let people judge and decide for themselves. Don’t be a Nanny.